Dogs Understand Both Vocabulary and Intonation of Human Speech

Summary: A new study reports dogs have the ability to understand human speech intonation and vocabulary by using similar brain areas to humans.

Dogs have the ability to distinguish vocabulary words and the intonation of human speech through brain regions similar to those that humans use, a new study reports.

Attila Andics et al. note that vocabulary learning “does not appear to be a uniquely human capacity that follows from the emergence of language, but rather a more ancient function that can be exploited to link arbitrary sound sequences to meanings.”

Words are the basic building blocks of human languages, but they are hardly ever found in nonhuman vocal communications. Intonation is another way that information is conveyed through speech, where, for example, praises tend to be conveyed with higher and more varying pitch. Humans understand speech through both vocabulary and intonation.

Researchers used fMRI to analyze the dogs’ brain activity as the animals listened to each combination. Their results reveal that, regardless of intonation, dogs process vocabulary, recognizing each word as distinct, and further, that they do so in a way similar to humans, using the left hemisphere of the brain.

Also like humans, the researchers found that dogs process intonation separately from vocabulary, in auditory regions in the right hemisphere of the brain. 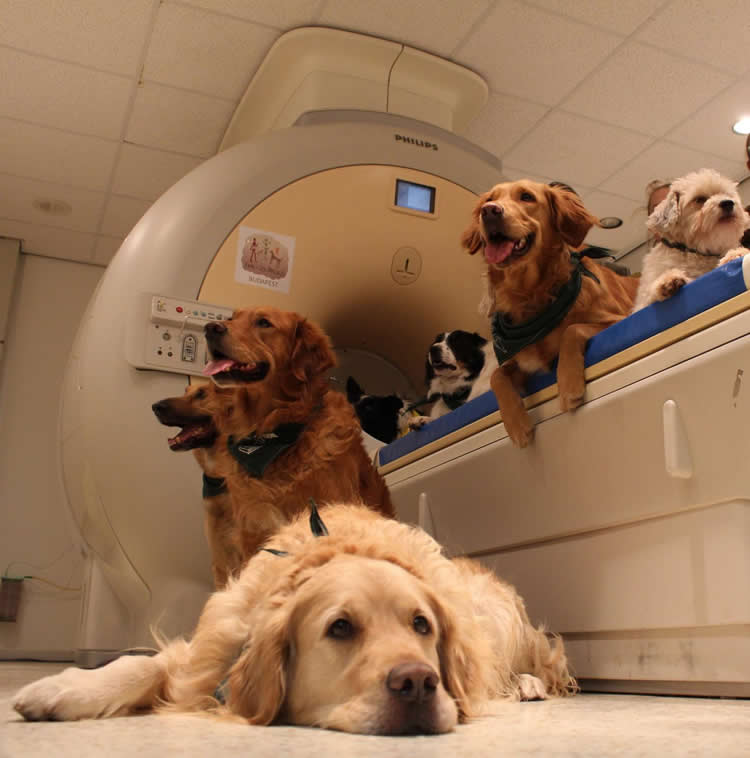 Trained dogs are around the fMRI scanner. This material relates to a paper that appeared in the Sept. 2, 2016 issue of Science, published by AAAS. The paper, by A. Andics at Eötvös Loránd University in Budapest, Hungary, and colleagues was titled, “Neural mechanisms for lexical processing in dogs.” NeuroscienceNews.com image is credited to Enik Kubinyi.

Lastly, and also like humans, the team found that the dogs relied on both word meaning and intonation when processing the reward value of utterances. Thus, dogs seem to understand both human words and intonation.

The authors note that it is possible that selective forces during domestication could have supported the emergence of the brain structure underlying this capability in dogs, but, such rapid evolution of speech-related hemispheric asymmetries is unlikely. Humans, they say, are only unique in their ability to invent words.

About this language research article

During speech processing, human listeners can separately analyze lexical and intonational cues to arrive at a unified representation of communicative content. The evolution of this capacity can be best investigated by comparative studies. Using functional magnetic resonance imaging, we explored whether and how dog brains segregate and integrate lexical and intonational information. We found a left-hemisphere bias for processing meaningful words, independently of intonation; a right auditory brain region for distinguishing intonationally marked and unmarked words; and increased activity in primary reward regions only when both lexical and intonational information were consistent with praise. Neural mechanisms to separately analyze and integrate word meaning and intonation in dogs suggest that this capacity can evolve in the absence of language.