Dogs Understand What’s Written All Over Your Face

Summary: A new study reports dogs use different parts of their brains to process negative and positive emotional cues in human facial expressions.

Dogs are capable of understanding the emotions behind an expression on a human face. For example, if a dog turns its head to the left, it could be picking up that someone is angry, fearful or happy. If there is a look of surprise on a person’s face, dogs tend to turn their head to the right. The heart rates of dogs also go up when they see someone who is having a bad day, say Marcello Siniscalchi, Serenella d’Ingeo and Angelo Quaranta of the University of Bari Aldo Moro in Italy. The study in Springer’s journal Learning & Behavior is the latest to reveal just how connected dogs are with people. The research also provides evidence that dogs use different parts of their brains to process human emotions.

By living in close contact with humans, dogs have developed specific skills that enable them to interact and communicate efficiently with people. Recent studies have shown that the canine brain can pick up on emotional cues contained in a person’s voice, body odour and posture, and read their faces.

In this study, the authors watched what happened when they presented photographs of the same two adults’ faces (a man and a woman) to 26 feeding dogs. The images were placed strategically to the sides of the animals’ line of sight and the photos showed a human face expressing one of the six basic human emotions: anger, fear, happiness, sadness, surprise, disgust or being neutral.

The dogs showed greater response and cardiac activity when shown photographs that expressed arousing emotional states such as anger, fear and happiness. They also took longer to resume feeding after seeing these images. The dogs’ increased heart rate indicated that in these cases they experienced higher levels of stress. 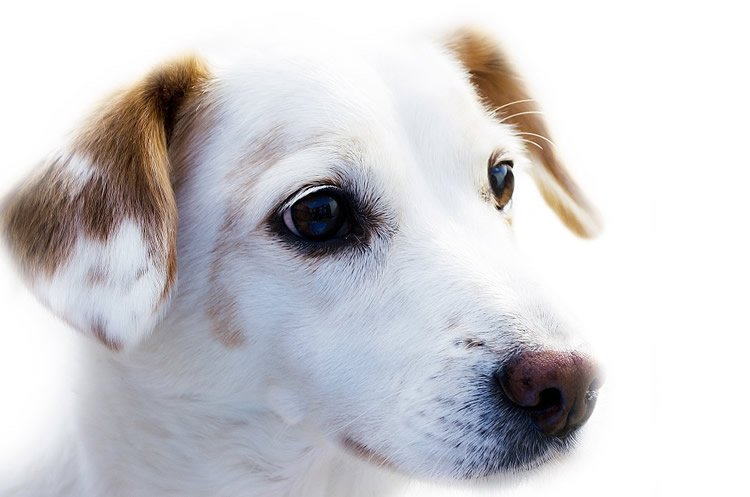 By living in close contact with humans, dogs have developed specific skills that enable them to interact and communicate efficiently with people. NeuroscienceNews.com image is in the public domain.

In addition, dogs tended to turn their heads to the left when they saw human faces expressing anger, fear or happiness. The reverse happened when the faces looked surprised, possibly because dogs view it as a non-threatening, relaxed expression. These findings therefore support the existence of an asymmetrical emotional modulation of dogs’ brains to process basic human emotions.

“Clearly arousing, negative emotions seem to be processed by the right hemisphere of a dog’s brain, and more positive emotions by the left side,” says Siniscalchi.

The results support that of other studies done on dogs and other mammals. These show that the right side of the brain plays a more important part in regulating the sympathetic outflow to the heart. This is a fundamental organ for the control of the ‘fight or flight’ behavioural response necessary for survival.

Recent scientific literature shows that emotional cues conveyed by human vocalizations and odours are processed in an asymmetrical way by the canine brain. In the present study, during feeding behaviour, dogs were suddenly presented with 2-D stimuli depicting human faces expressing the Ekman’s six basic emotion (e.g. anger, fear, happiness, sadness, surprise, disgust, and neutral), simultaneously into the left and right visual hemifields. A bias to turn the head towards the left (right hemisphere) rather than the right side was observed with human faces expressing anger, fear, and happiness emotions, but an opposite bias (left hemisphere) was observed with human faces expressing surprise. Furthermore, dogs displayed higher behavioural and cardiac activity to picture of human faces expressing clear arousal emotional state. Overall, results demonstrated that dogs are sensitive to emotional cues conveyed by human faces, supporting the existence of an asymmetrical emotional modulation of the canine brain to process basic human emotions.