Reading Risk Behavior in the Brain

Anxious people take fewer risks – this is not surprising. However, a team of psychologists from the German Friedrich Schiller University Jena, together with partners from Würzburg in Germany and the Canadian University of Victoria have succeeded in making this decision process visible in the brain, allowing them to predict the behaviour of individuals. They conducted an experiment to measure participants’ risk behaviour while using electroencephalography (EEG) to observe their brain activity. They report on their work in the current issue of the scientific journal Psychophysiology.

“For the experiment, we used a questionnaire to select 20 high anxious and 20 low anxious participants,” explains Dr Barbara Schmidt of the University of Jena, who led the project. “During the actual experiment, the participants had to turn one of two cards in each trial of a risk game. In each trial, they could win a maximum of 11 cents. The important point was that they had to decide between two risk options: a high-risk option in which they could win either 11 cents or zero cents, and a low-risk option in which the test person could win either five or six cents. The expected value of 5.5 cents was always the same.” In the experiment, high anxious participants chose the low-risk option more often.

But the key finding of the study resulted from a glance at the EEG recorded during the experiment. While the participants decided which of the two risk options they want to choose, a specific type of brain activity – Frontal Midline Theta Power – was especially high. “Previous research had already shown that this brain activity is particularly pronounced in anxious people, but until now we did not know what effect it had on behaviour,” said psychologist Schmidt. “With our study we have now been able to demonstrate that higher Frontal Midline Theta Power shows heightened cognitive control – weighing up the options more intensively – during the decision-making process.” This is a pivotal finding for behavioural research.

Psychologists often examine correlates in the brain that indicate a certain psychological concept, but it is not always possible to draw conclusions about a person’s behaviour. “In our results, everything just fits together very well,” says Barbara Schmidt. “We have the initial psychological disposition, the appropriate brain activity that represents the decision-making process, and the resulting behaviour. The link between anxiety and the associated behaviour is therefore completely explained.” 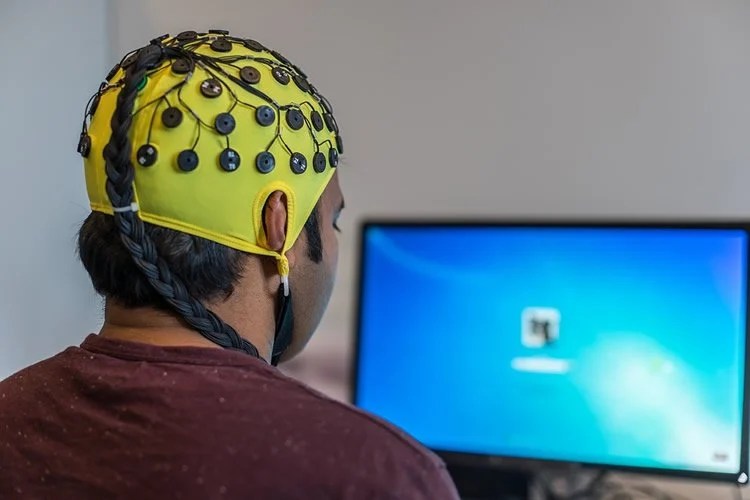 With this knowledge, the researchers can even use the relevant EEG to predict the decisions a person will make in specific situations. Higher Frontal Midline Theta Power in-dicates a low-risk decision. NeuroscienceNews.com image is in the public domain.

With this knowledge, the researchers can even use the relevant EEG to predict the decisions a person will make in specific situations. Higher Frontal Midline Theta Power indicates a low-risk decision.

Barbara Schmidt would now like to use these findings in her further research. Her specialist field is hypnosis. Here, too, she is investigating brain waves using EEG. “In subsequent studies I would like, to find out whether people take greater risks if they are told under hypnosis that they feel safe,” she explains. “The new findings on Frontal Midline Theta Power will therefore be very helpful.”