Summary: A new study reveals premature babies may suffer from severe abnormalities of the thalamus, especially if they are born before 28 weeks gestation.

Premature babies undergoing hundreds of life-saving procedures exhibit abnormal development of the thalamus and cognitive and motor impairments in the first years of life, according to a study published in JNeurosci of infants born as early as 24 weeks of gestation.

Steven Miller and colleagues studied 155 newborns from the neonatal intensive care unit at BC Women’s Hospital in Canada, collecting neuroimaging data shortly after birth and again at the age they were expected to have been born.

Researchers observed the most severe abnormalities of the thalamus, which transmits sensory information to the cortex, in the extremely preterm newborns (born less than 28 weeks of gestation). These changes were related to exposure to painful stimuli in the first half of the neonatal period as well as cognitive and motor ability assessed at three years of age. 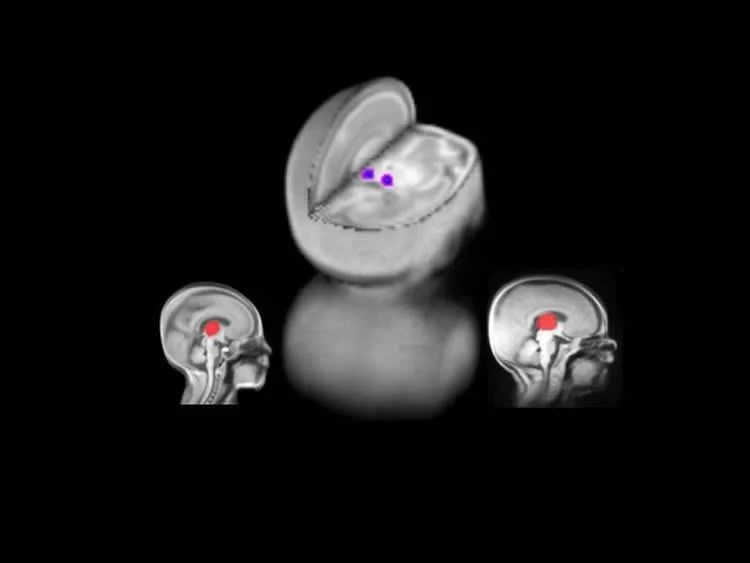 Very preterm born neonates can be exposed to hundreds of skin breaking procedures during the first weeks of life in the neonatal intensive care unit. Thalamic growth, obtained from volumetric segmentations (red) on magnetic resonance images (sagittal views) at postmenstrual ages of 32 and 40 weeks, was reduced in neonates receiving a high number of early skin breaking procedures, adjusting for factors related to prematurity and clinical care. Deformation based morphometry analysis revealed (centre, 3D image) that early skin breaking procedures were associated with reduced volume (blue) in the territory of the somatosensory nuclei in the thalamus. NeuroscienceNews.com image is credited to Steven Miller & Emma Duerden.