Summary: Researchers report those who are more prone to take risks while playing a simple children’s game may be more prone to risky behaviors, like binge drinking.

New Husker research suggests the same people who get a stronger jolt playing Crocodile Dentist may chase a more dangerous buzz when drinking, thanks to an anticipatory spike in their brains.

The results showed the brains of self-reported binge drinkers react to perceived risk much more prominently than non-binge drinkers.

“It seems likely that binge drinkers get a similar stronger response while drinking.”

Twenty-six people were tested for the study, which included playing a version of the game and answering questions about alcohol usage over the past 30 days. Binge drinking was defined as five or more drinks within a few hours. While undergoing EEG testing, they were instructed to press each crocodile tooth in a sequential order. The game provides a healthy dose of risk through pressing teeth down until the pressing the wrong tooth makes croc’s jaw snap shut on a player’s finger. 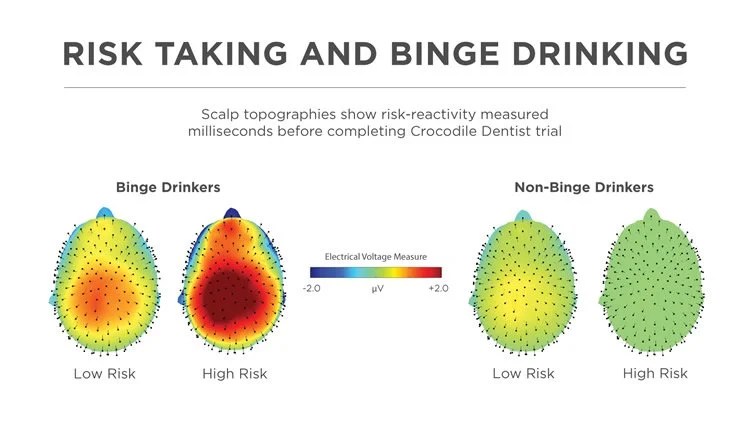 The EEG imaging found evidence of elevated neural reactivity among binge drinkers as the likelihood of getting chomped on increased, while the response of non-binge drinkers remained largely unchanged. The findings are one of the first examples to show an association between risk reactivity and binge drinking frequency.

Kiat noted the study is also novel in that the risk-taking activity did not include a decision-making component, since participants were told to press the Crocodile Dentist teeth down in a certain order, instead of randomly.

“Prior research hasn’t looked at raw reactivity, without a decision-making process,” Kiat said. “We know that high-risk taking populations exhibit elevated risk reactivity during decision-making, but would that elevation still be there even if no decision is involved?

“Our study suggests that the story might actually be quite simple, that even if you take away the decision element, you still get that escalation of reactivity in binge drinkers, and possibly in others who choose high-risk activities.”

Kiat said the findings could be expanded in a larger study and help further explain the brain’s role in choosing hazardous behaviors.

Tick-Tock Goes the Croc: A High-Density EEG Study of Risk-Reactivity and Binge-Drinking

Links between individual differences in risk processing and high-risk behaviors such as binge drinking have long been the focus of active research. However, investigations in this area almost exclusively utilize decision-making focused paradigms. This emphasis makes it difficult to assess links between risk behaviors and raw risk reactivity independent of decision and feedback processes. A deeper understanding of this association has the potential to shed light on the role of risk reactivity in high-risk behavior susceptibility. To contribute towards this aim, this study utilizes a popular risk-taking game, the crocodile dentist, to assess links between individual differences in decision-free risk-reactivity and reported binge drinking frequency levels. In this task, participants engage in a series of decision-free escalating risk responses. Risk-reactivity was assessed by measuring Late Positive Potential responses towards risk-taking action initiation cues using high-density 256-Channel EEG. The results indicate that, after controlling for overall alcohol consumption frequency, higher rates of reported binge drinking are associated with both increased general risk-taking responsivity and increased risk-reactivity escalation as a function of risk level. These findings highlight intriguing links between risk reactivity and binge drinking frequency, making key contributions in the areas of risk-taking and affective science.