Human Brain Allocates Attention Based on Known Size of Objects

Summary: Researchers report our knowledge about the real world size of an object, and not its visual size, helps to guide our attention.

A stop sign at an intersection appears to be larger than a parked car across the street. Is our brain playing tricks on us?

Researchers at the George Washington University gained important insights into how the human brain processes information and allocates attention. Their study, “Attention Scales According to Inferred Real-World Object Size,” shows people pay attention to objects based on their real-world size, rather than how they are perceived by the eye.

“Since a person can only pay attention to a limited amount of information at a time, our brain uses object size to determine how much attention to allocate to that object,” Sarah Shomstein, a professor of cognitive neuroscience at the GW Columbian College of Arts and Sciences, said. “However, the way our eyes perceive an object can be different from its actual size, such as a car appearing large when it is close and small when it is far. Our study has shown for the first time that the brain adjusts attention based on our knowledge of an object’s size, not how our eyes view it.”

The findings could have significant impacts on many everyday tasks, from a radiologist looking for tumors of various sizes, to an airport security agent tasked with searching for threats hidden in luggage. This study suggests attention allocation can be trained, which could lead to improvements and efficiency in performing such tasks.

To determine whether the human brain differentially allocates attention depending on an object’s size, Dr. Shomstein and her team showed participants several images of small and large everyday objects such as a domino or billiards table, but presented them at an identical fixed size. The team measured how long it took participants to identify probe targets that were embedded within object images.

Researchers found that responses were quicker across known smaller real-world sized objects compared to larger ones, even though the space occupied by both objects on the eye was the same.

“If objects are of identical size on your eye, but you know that one of them is smaller–such as a domino nearby versus a pool table far away–you allocate more attention to the smaller item,” Dr. Shomstein said. “Your knowledge of the object’s size overrides its physical size thereby adjusting how much attention your brain allocates to the objects.” 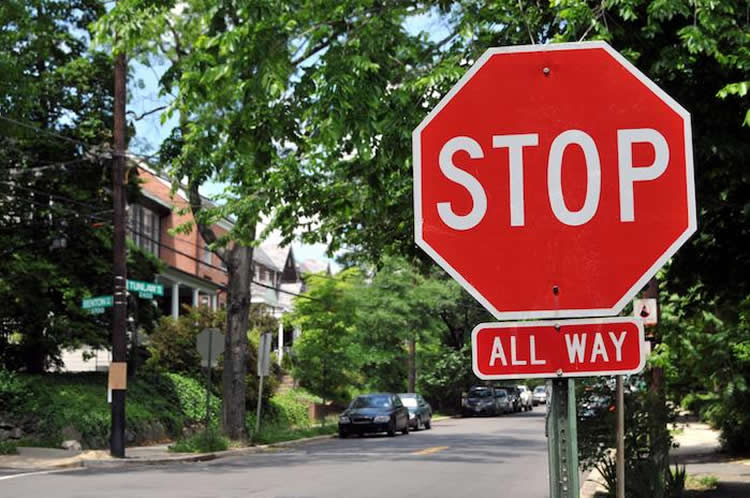 A stop sign in the foreground appears to be larger than cars parked across the street. NeuroscienceNews.com image is credited to George Washington University.

“Your own personal ratings determine how efficient you are going to be at attending to that object,” co-author Andrew J. Collegio, a GW alumnus and researcher in Dr. Shomstein’s Attention and Cognition Lab, said. “If you think the pool table is really large, then your attention is going to be less focused.”

Dr. Shomstein and Dr. Collegio hope these findings will help future researchers predict how effectively people process particular objects as they pay attention to the world around them.

Funding: The work was supported by a National Science Foundation grant BCS-1534823.

Natural scenes consist of objects of varying shapes and sizes. The impact of object size on visual perception has been well-demonstrated, from classic mental imagery experiments1, to recent studies of object representations reporting topographic organization of object size in the occipito-temporal cortex2. While the role of real-world physical size in perception is clear, the effect of inferred size on attentional selection is ill-defined. Here, we investigate whether inferred real-world object size influences attentional allocation. Across five experiments, attentional allocation was measured in objects of equal retinal size, but varied in inferred real-world size (for example, domino, bulldozer). Following each experiment, participants rated the real-world size of each object. We hypothesized that, if inferred real-world size influences attention, selection in retinal size-matched objects should be less efficient in larger objects. This effect should increase with greater attentional demand. Predictions were supported by faster identified targets in objects inferred to be small than large, with costlier attentional shifting in large than small objects when attentional demand was high. Critically, there was a direct correlation between the rated size of individual objects and response times (and shifting costs). Finally, systematic degradation of size inference proportionally reduced object size effect. It is concluded that, along with retinal size, inferred real-world object size parametrically modulates attention. These findings have important implications for models of attentional control and invite sensitivity to object size for future studies that use real-world images in psychological research.